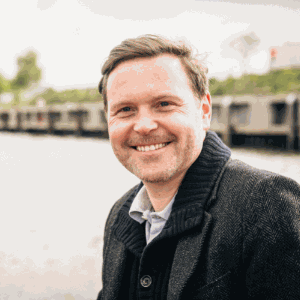 Skålleague of the Month - July'22

Hubert Neubacher was born in Austria in 1972, where he went to school and made his apprenticeship as a waiter in a 5-Star-Hotel.

From there he moved to Germany and in 1991 he started working at the Renaissance Hotel Hamburg.

While working at the Hotel Hubert spent a lot of time at the Hamburg harbour and it became one of his favourite places to be. In June of 1994 he became the Assistent to the Managing Owner of the Shipping Company Barkassen-Meyer. He worked in the office as well as on each of the 6 boats at the time. Here he was involved in all aspects of sales, marketing and management right from the start.

In 2002 he became Managing Director and in January of 2013 the owner of the company.

Barkassen-Meyer was founded in 1919 and its main business are Sightseeing-Tours and private charters in the harbour and on the river Elbe. Hubert also uses his ships for a wide variety of art and cultural events, as well as partys of all kinds.

The ‘Barkassen’ - barges are a beloved feature in Hamburg, much like the gondolas in Venice, and a harbor cruise is a must when visiting the city. The 100th anniversary was celebrated on the Elbe in March 2019 with high-ranking guests, including many Skål International members. This celebration attracted a lot of attention in Hamburg.

On the occasion of the anniversary this magazine was created: BRÜCKE 6 - 100 Jahre Barkassen-Meyer.

It was always important to Hubert to maintain the tradition of the trade and company so typical of Hamburg and at the same time ensured that today it is a modern fleet. In recent years he has modernized his ships and built some new ones.

Five ships are now so-called ‘art barges’. Hubert made these ships available to German artists, as quasi-canvases, which they were allowed to paint and artistically design - primarily out of personal joy! So they are floating and cheerfully-colorful works of art in the port of Hamburg.

For years, the Skål International logo has been large and clearly visible on all its ships and in the three sales offices at the St. Pauli-Landungsbrücken and is noticed by the many tourists every day.

Hubert is a great example of “Doing business among friends” and he is a great networker. He uses his business contacts to promote Skål International whenever possible. Skål International Hamburg plays a vital role in the city for the executives in the tourism industry. Over 150 members from all areas of the industry use the networking opportunities that come with the membership. As president of the club, Hubert has made many new contacts especially during the past two years of the pandemic. Because of his strong personal interest in art, culture and people, his contacts and his influence in the city extend far beyond tourism.

Because Hubert is full of creative ideas, the club has been mentioned many times in the local press. E.g. for the 70th anniversary of the club in 2020 and for the German Skål International Meeting from 10th-12th June 2022 - there where over 180 City Light Promotions all over the town, each for 3 days. Together with his organizational team and with the support of many Skål International members, Hubert was able to offer all participants in the meeting, including Skål International World President Burcin Turkkan, an all-round great and varied Hamburg program.

He holds various honorary posts in Hamburg and is allowed to work in various boards of trustees. It is important to him to give something back to society and that is why he personally and with his team regularly supports a wide variety of social and cultural institutions.

With his partner Norbert, both are welcome guests at many events in the city of Hamburg. Privately he goes to many concerts (classic and pop) and enjoys collecting art - sometimes pop art - and likes going to galleries.

But he also used this difficult time for himself and, for example, has found his way back to sports in the last two years and has been running his own podcast ‘Hubis Hafenschnack’ since May 2021. He is also a popular guest speaker for school classes and students on the subject of jobs and training in tourism and the Port of Hamburg.

He lives his life, his job and Skål International with a lot of passion and values such as trust, openness, transparency, tolerance, diversity and mutual respect are very important to him.

That's why, even after all these years, it's still a pleasure for him to be part of the large Skål International network. He wishes the association all the best for the future, much success and that the coming challenges can be mastered well.

Above all, he wishes the worldwide members that tourism finds its way back to the old quality and strength.

Skålleague of the Month - July'22