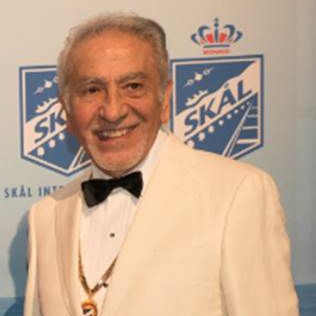 Born into a Babylonian/Chaldean Christian family, in the Christian Quarter in Iran, the family shield with our torch of light, the cross and tower of Babylon.

Our language is Aramaic (language spoken by Jesus). I write, read the old Bible version even speak and write the two new dialects of Aramaic. Also I speak Assyrian, Kurdish, Persian and English and understand a few regional languages.

I was named Constantine as I was born on 14 Sept, the Christian historical day the Holy Cross was found by Emperor Constantine’s mother Helena.

I studied in our Chaldean Catholic School, mentored by our head priest. At the age of 12, I started teaching Aramaic, English, and mats at the same school, earning my tuition and pocket money, and I was elected Captain of the school until I completed high school.

I got employment with The GSA of Pakistan International Airlines as a Passenger Service at Tehran Airport while continuing my studies in Ancient History as I wanted to learn more about our background and how our community moved from of city of Mada-en of Persian Gulf (originally Sea of Babylon), to Senah where I was born.

My curiosity in history and working with airlines and visitors to Iran gave me a lead in assisting customers better, especially assisting those seeking information of what they can see during their stay in Tehran, which was part of customer services of the airlines. Eventually, I became one of the three self-taught Tourist Guide in Tehran and explored the opportunity to study more and went beyond the borders to find agents and clients and get a Diploma in Tourism Management through a United Nations representative and connection with Torino of Italy, which qualified me to teach tourism.

My advanced knowledge in Tourism made me get the jobs I wanted. I was eventually headhunted by Iran Safaris, Iran Shikar, the unique organisation owned by the Royal Family, to expand more... I was the first to organise and operate a Desert Expedition on Camelback and stay in the 4th Century Desert Caravansari. And find the Hassan Sabbah’s Castle of Assasins “Alamot” in 1975 and operate 3 days Safari Style package and stay in the tent to explore the other surrounding castles of Meymoon Dej, and Lamyasar of the same group.

In 1968 I joined Skål International in Tehran as the youngest member. I met Jimmy James and others Australian Skålleagues at my first World Congress in Florence Italy in 1976. In December 1978, just before the Iranian revolution, I moved to Australia. Thanks to the advice from Skålleagues, I got a junior job within six days, to learn the Australian industry from the bottom up. Rapidly I progressed to senior position with Jetset Tours, later with STA Student Travel. I transferred my active Skål International membership to Adelaide and later to Melbourne. In 1980, I was amongst the 30 International Travel Advisors selected to go to China to provide ideas of how to open up China for individuals and group Tourism.

Starting my own Travel agency in Australia was a dream for a long time. Eventually, in 1986 with the help of Birgit, we purchased Go Travel Agency, in a suburb of Melbourne and got accredited IATA agency no 0098, where we succeeded after two years to be recognised in the area and make it profitable. By this time, I had joined the Rotary Club of Preston, and after two years, I was elected President, later District Secretary to the Student Exchange Worldwide.

My passion for specialised tours and my roots helped me create special Catholic Pilgrimage Tours, in combined English and Aramaic Languages and escorted them myself.

In 2008 we moved to Monaco. As Skål International Monaco had been dormant for many years, I persuaded the head of the Monaco Tourism office to rejuvenate the club, so I could transfer my membership and continue my passion for Skål International. In 2012 we activated the club successfully. In 2013 I was elected President and International Skål Councillor for Monaco.

In 2015 I led our bid for Skål International World Congress 2016 and three of us presented it in Mexico. We won with a big vote.

We organised a prestigious and memorable Skål International World Congress. Our young Skål International member, Anastasia acted as Master of Ceremony, at the opening ceremony, and Roger Moore accepted my invitation to be guest of honour at the Gala dinner.

I mentored Anastasia, and together after two years we achieved the unachievable task of chartering the first Skål International club in St Petersburg, Russia. I assisted Skål International Athens to keep up with their dues and membership.

First, we donated cows, building projects (4 classrooms, Library, Kitchen and covered Vegetable Garden) for the school help during draught, fodder for cattle and basic food for people. The last two years we have paid full salary for 10 teachers, cook and 2 maintenance staff as well as US$50.- for every student as the community has no income from tourism. The number of students increased from 360 to 680 and still growing.

Now we have a healthy Skål International Monaco. And I am still active at the age of 80!

February'22 Notes from the Editor