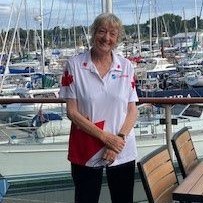 Skålleague of the Month - August'21

I was born in southern England, UK. We immigrated to Canada when I was 8 years old, settling in Victoria, British Columbia after 18 months in Saskatoon, Saskatchewan.

After completing High School, I spent a year at a Canadian Junior College in Neuchatel, Switzerland and then on to completing a BA at Queens University in Kingston, Ontario. My summer job through 2014 these years was at The Butchart Gardens in Victoria, and I developed a love of the hospitality industry and a fierce desire to see the world.

I spent 2 years in New Zealand, working for the New Zealand University Students Association, 5 years in Toronto at the Canadian equivalent and then moved to London, UK to run my own Airline & Tour Operators Representation Company at Gatwick, Bristol, Manchester, Belfast, and Cardiff Airports. I married in 1985 and we had a daughter in 1988. In 1993, very sadly, my husband died, and I took the decision to return to Victoria.

Returning (again) to Victoria in 2016, I took on the role of Executive Secretary of Skål International Victoria 2016. We started to rebuild the club which had seen a fair amount of attrition.

I firmly believe that members need to understand the relevancy of their club on a local basis but also on a national and international basis. To understand that the network at their fingertips opens doors and offers opportunities unsurpassed on a global basis. But it must be fun too.

Victoria is encouraging members to bring guests to our meetings. Now that the categories have expanded, this is proving to be a very good source of new and interesting members, all of which, given the nature of the local economy, are very much members of a widened hospitality family.

Skålleague of the Month - August'21

August'21 Message from the President