Growing up as Benita Alk in the District, Benita did not aim for a travel career. She graduated from business school at the University of Wisconsin in 1958 with hopes of pursuing a career in Merchandising. Benita married Robert Lubic in 1959 and moved to his hometown of Pittsburgh. Benita found it hard to get a leg up in the Steel City. “I searched for a job during a steel strike and nobody was anxious to hire a newly married Jewish woman”. Her husband, who enjoyed travelling, suggested she try becoming a travel agent and in November 1959, her business, now Transeair Travel, was born as a one-woman operation.

Benita gave birth to three children, Wendie in 1961, Bret in 1964, and Robin in 1965, “I felt I was pregnant a long time”, she says. In 1965, her husband took a teaching position at American University and the family, including the housekeeper, moved to D.C. where Benita re-established Transeair’s Headquarters.

While Benita’s agency focused mostly on corporate group and Incentive travel. Her agency began taking groups to Cuba in 2000 and have traveled there more than 30 times with groups of many interests including beekeepers and baseball enthusiasts, and the Washington Ballet who performed at the dance festival in Havana.

Benita has always been very helpful to the Jewish communities during her travels especially in Havana, Cuba, Tokyo, Japan, one of her favourite destinations.

In 1962 Benita escorted a small group of women to The Orient as it was called visiting most of the countries excluding China which was not open to American tourism.

Her first trip abroad was after graduating from college and she visited 11 countries in seven weeks on an air ticket which cost $500 and allowed unlimited stops.

Over the years, Benita has seen many changes in the travel industry. Through airline and hotel strikes, economic downturns, and recently having experienced the pandemic crisis, Benita considers herself a survivor. Her patience and flexibility as well as a willingness to dot every ‘I’ and cross every ‘t’ has helped her to develop an award-winning travel agency.

The travel business has offered many fabulous opportunities while representing some major corporate companies and organizations which sponsored tours or incentive Programs. The Pittsburgh Cathedral Choir performing for Thanksgiving at Saint Peter’s Basilica in Rome with Cardinal Wright in 1973.  Meetings with government officials around the world, and my first visit to China in 1983 plus the Olympics in Calgary were some of the highlights.

Benita also visited and toured Ukraine in 2007 and is saddened to see the destruction which is happening today to this beautiful country and its people.

Some folks wait until retirement to indulge a yen for travel, but not Benita. She’s been globetrotting as the President and Owner of Transeair Travel for 63 years and has covered 120 countries across all seven continents. Benita was very active in ASTA from 1962 and became a member of Prost (1970) which was a travel industry club founded by women but did not exclude men as Skål International did not allow women as members.

Benita was a long-time Skål International Washington DC board member representing Travel Agents and brought her valuable travel experience to every meeting along with recruiting members to join the club. She also took advantage of her travels to visit and meet with other Skål International club members around the world.

Today at 85 years young, Benita is still planning travel itineraries for her many clients to places like Cuba, Greece, UK.

The past few years have been very tough on Benita with so many dear friends passing including her beloved husband Bob. RIP.

Benita and President Morgan Maravich recognized for her many years as a member of Skål International Washington DC. 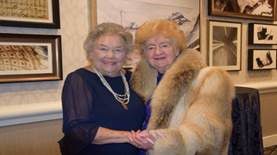 According to the second edition of the Global Report on Women in Tourism (2019) by UNWTO, approximately 54% of people employed in the travel & tourism industry are women, compared to 39% in the broader economy.

Women make up 30% of the Skål International Washington DC membership today. We are a better club today because of them and must thank Benita as the first woman member.