The sculpture, located in a central corner of Villa la Angostura, celebrates the core values of the Skål International Association, namely the Friendship between its member tourism executives.

The 'arms' holding the globe symbolise the union and equality of Skålleagues from all the countries and cities that make it up and are engraved with the distances from clubs on all continents to the city of Villa la Angostura, distances that unite us with them all over the planet.

Patagonia is purposely represented at the top of the Earth, expressing our view from the South.

The sculptor is the plastic artist Andres Zerneri, Director of the Museum of Contemporary Art of Villa la Angostura and author, among other works, of the Monument to Juana Azurduy, located in the Kirchner Cultural Centre of the Autonomous City of Buenos Aires.

For the creation of the Monument to Skål International Friendship, the local club had the support of the National Committee of Skål International Argentina, as well as the Ente de Promoción Turística de la Provincia del Neuquén. It is important to note that the same was authorised by the Public Works Department of the City of Villa La Angostura and the Deliberating Council issued a Municipal Ordinance in this regard.

The inauguration of the monument took place on 25 October 2021 and the traditional ribbon was cut by the Mayor of the town, Dr. Fabio Stefanni, and the President of the National Committee of Skål International Argentina, Mr. Jorge De Cesco.

Accompanying the club members were many authorities from both the municipality and Skål International, the Deputy Mayor Mr. Luciano Villalba, the Secretary of Government, Mr. Javier de los Rios, the Secretary of Tourism, Mrs. Marina Gonzalez, the President of the Honourable Deliberating Council Mr. David Tressens, accompanied by several Councillors and the Undersecretary of Tourism of the Province of Neuquen, Mr. Hernan Santarelli.

After the emotional inauguration, the local Secretary of Tourism hosted a cocktail party at El Santuario, in the historic house built by Arq. Alejandro Bustillo, the most famous architect of the Argentinean Patagonia. 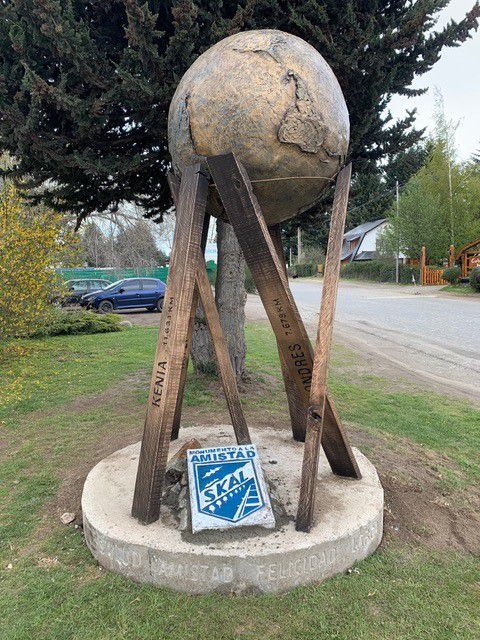 watch the Video of the creation and assembly process